Delegates at a robotics and automation event at the Coventry-based Manufacturing Technology Centre will get the chance to see one of the world's biggest robots in action.

The Insight into Automation and Robotics event at the MTC on November 26 will include a demonstration of the MTC's floor-mounted FANUC M-2000 robot, which is capable of lifting 2.3 tonnes and is the world's strongest industrial robot - capable of lifting the side of a pre-fabricated house, or a complete car.

The free event, in conjunction with the EU-funded ROBOTT-NET project, will give delegates insights into the cutting edge robotic technology in development at the MTC, and how automation can drive productivity in UK manufacturing.

The day will include speakers from a range of sectors highlighting how automation and robotics have transformed their business and how the technology developed at the MTC can be deployed.

The event will also include VIP tours of the MTC workshops, and an update on numerous ROBOTT-NET automation projects and pilots. There will also be demonstrations of robotics and automation in the construction industry.

The event is aimed at decision makers and end users who appreciate the need for robotics and automation but are unsure of the best equipment to use, how to integrate it into their production lines, or how to measure the benefits.

End users, technology providers and suppliers are invited to the event which is the sixth in a series of ROBOTT-NET events at the MTC.

Jeremy Hadall, chief engineer for intelligent automation at the MTC, said the event would be a great opportunity to see the latest robotics technology and network with technology providers and robotics engineers.

Jeremy added, "They will also be able to see our FANUC M-2000iA/2300 six-axis robot which can lift and manoeuvre major assembled off-site building modules and place them with high precision. It is large and strong and much faster and more flexible than a traditional crane or hoist and is set to play a major role in the construction sector of the future." 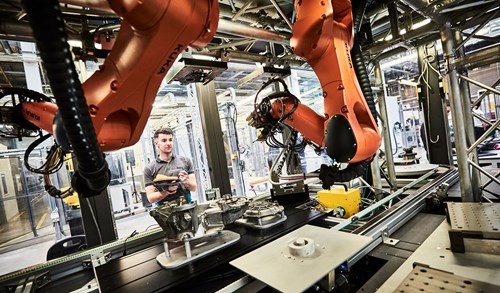 The event will allow delegates to explore ground-breaking and innovative industrial robotics and understand how they can benefit manufacturing operations. With experts on hand, forum discussions and case study exhibits, we will be able to highlight successful projects which have reaped the benefits of intelligent automation, and help people make the right decisions. It's all about technology transfer and the sharing of best practice.
Jeremy Hadall, Chief Engineer for Intelligent Automation, MTC