An MTC apprentice has won the Best of British Engineering Award, the top accolade at the 2021 Enginuity Skills Awards, and has also been named as SME Apprentice of the Year.

The two awards recognise 19-year-old Davina Kaur’s inspirational personal and professional transformation through her apprenticeship, as well as marking her commitment to the manufacturing sector as an ambassador for STEM careers and apprenticeships.

Now in the final year of her training, Davina joined the MTC’s apprenticeship programme in September 2018. At the time, she was battling severe mental health issues, including anxiety and depression, having attempted to take her own life earlier in the same year.

With the support of the team at MTC Apprenticeships, she has overcome her challenges and exceeded even her own expectations to become one of the training provider’s highest performing and most ambitious learners. She was also the first female technician on the shop floor at local employer, RNA Automation.

As well as paying for the apprenticeship training, this extra funding now takes the available support up to a maximum of £8,200, significantly offsetting the cost of employing an apprentice for the first year of their programme.

With the help of a personal mentor and a programme of mental health support, Davina transformed from being a quiet and withdrawn school leaver into a confident engineering professional and passionate advocate for apprenticeships.

As a registered STEM ambassador, she regularly promotes the benefits of taking on apprentices to employers at national events and encourages schoolchildren to consider engineering careers and apprenticeships through workshop tours. She also takes part in regular charity events, focusing particularly on fundraising through sporting challenges and working with the homeless.

The cutting edge skills she gained through the MTC’s future-focused apprenticeship programme, such as additive manufacturing and advanced automation, have also supported RNA to identify opportunities to innovate and become more efficient and competitive.

Davina’s manager at RNA, engineering manager Phil Baker, said Davina had exceeded the business’s expectations of what an apprentice can achieve.

Davina’s consistently outstanding performance and commitment to professional development have also seen her winning the MTC’s Apprentice of the Month award twice, and she was named Apprentice of the Year in LeicestershireLive’s 2020 Education Awards as well as reaching the final of the GTA England apprenticeship awards.

Davina hopes to use her award to encourage others to explore the opportunities an apprenticeship offers, and wants everyone to have the same chance to thrive. She also wants to inspire more women to pursue a career in engineering.

"My apprenticeship literally changed my life! I’d like my story to inspire others to believe that you can achieve anything with the right support, attitude and commitment. It’s much easier to imagine yourself somewhere when you can see someone like you already there – if I can do it, anyone can."

"Davina’s journey so far has been inspirational and we’re delighted that her achievements have been recognised through these two highly prestigious awards. At MTC Apprenticeships, we are committed to supporting all of our learners to fulfill their potential, helping them develop the skills, knowledge and tools they need to succeed and to secure the future of UK engineering and manufacturing. We are so proud of how far Davina has already come in what promises to be a fantastic career."

After receiving a record number of applications last year, and with a pool of top quality, pre-screened candidates ready to be matched with prospective employers, the MTC Apprenticeships team of training and funding experts is primed to support manufacturers to attract, secure and fund the best new talent for their business’s future.

The Enginuity Skills Awards aim to celebrate the people and organisations who are working hard to create the next generation of engineers. The virtual awards ceremony – postponed from last year due to the global pandemic – was hosted by TV presenter and qualified engineer Steph McGovern from her Packed Lunch TV studios in London.

"Davina and all the winners and nominees represent the very best that this country has to offer – and is a powerful reminder of just why engineering is so important to all of us."

More about the awards and Enginuity’s work can be found at https://enginuity.org/news/skills-awards-winners-announced/ 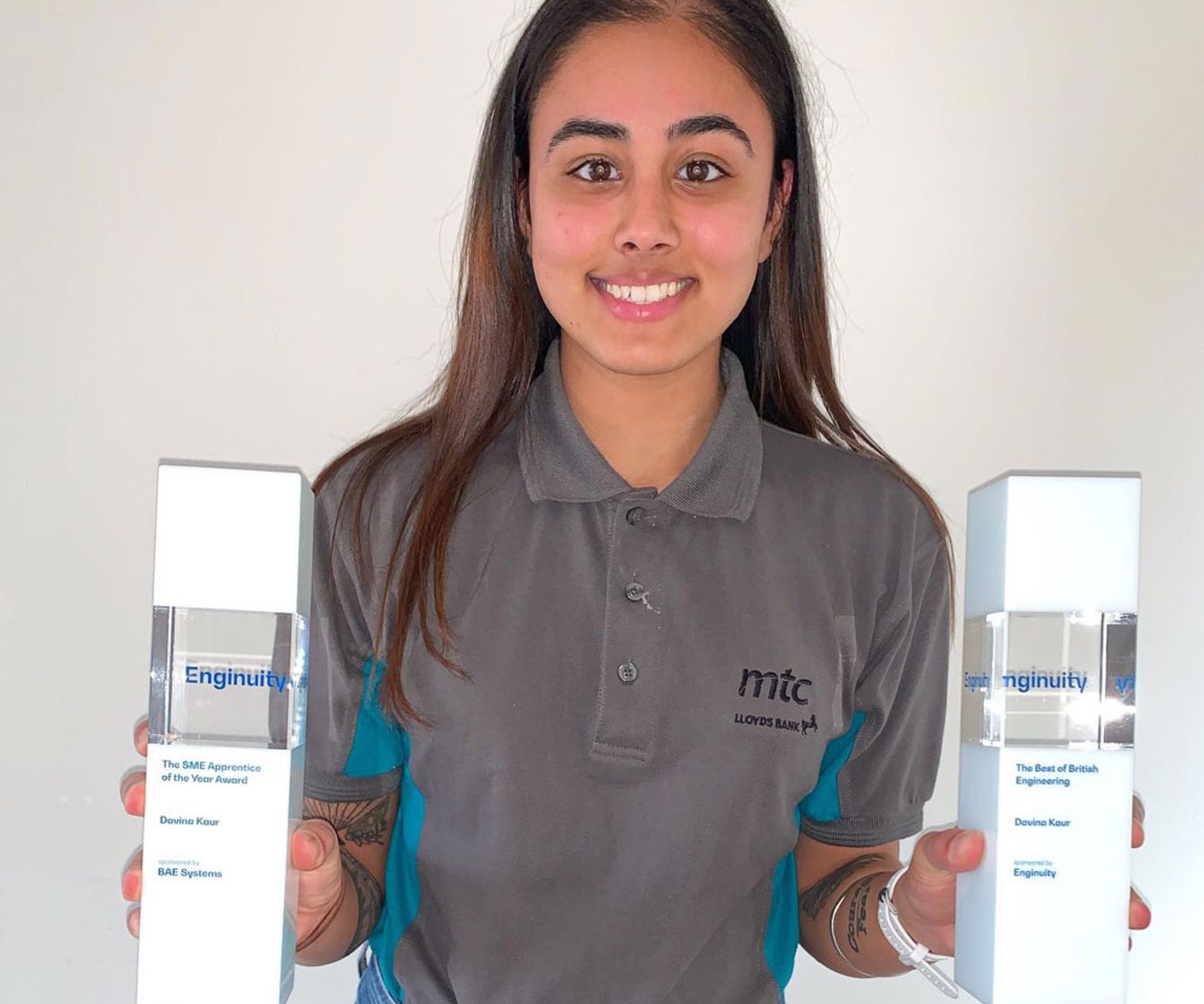 We employed Davina because of her passion about engineering, determination to progress and develop, and natural engineering ability. She has an extremely positive attitude and an eagerness to get involved. We knew she would be a great fit within our team as well as reinvigorating them, because her enthusiasm is infectious. Impressively, she was already working on revenue-generating customer projects within two months of joining us